Friction vs. Impact In Pneumatic Conveying

The issue of friction vs. impact in pneumatic conveying is mainly about how much damage a pneumatic conveying system can sustain from the bulk material being conveyed over time. Understanding these types of wear will also allow you to protect the components in your system that are most susceptible to impact and friction forces.

By identifying and protecting the vulnerable components in a system, the wear and tear process can be minimized, as can breakdowns, repairs, periods of downtimes, and, of course, cost.

What Is Friction In Pneumatic Conveying?

Friction is produced when two surfaces slide past each other, creating an abrasive force that causes the particles on the surfaces to scrape together. This happens in pneumatic conveying systems when loose particles of the bulk material, like grains or plastic pellets, come into contact with the inner walls of the components, such as the elbows, couplings, tubes and pipes.

Frictional abrasion can become intense when the bulk material is moving at a high velocity. This abrasive friction becomes even worse when the particles change direction, which is why the insides of pneumatic elbows and other curved components are particularly susceptible to friction damage. If these parts are left unprotected, frictional abrasion can cause damage straightaway.

Different types of bulk materials have different levels of abrasiveness, and this is known as friction coefficient. For example, steel has higher friction coefficient than polyethylene pellets. The coefficient also has effects on the pressure inside the pneumatic system. Therefore, it’s an important factor in designing the system and whether it should be a dense phase or dilute phase design.

How To Recognize Impact In Pneumatic Conveying Systems

Just as with frictional abrasion, the bends in your pneumatic conveying system, particularly the elbows and other curved fittings, will be the most vulnerable to impact damage if left unprotected. Impact wear can result in the breakdown of your system if unchecked, so it’s important that you’re able to identify this.

[Related: Read our Guide to Selecting Elbows for your Pneumatic Conveying System]

Unlike frictional abrasion, particle impact damage usually presents as a hole or dent caused by the collision of particles in one particular area. You can typically see this happening right at or just off of the tangential line. Impact damage is the area where the particles of the bulk material collide with the back of components, and is particularly obvious on elbows that have a short radius. This happens because the moving particles don’t have sufficient time to slow down in these areas.

Key Differences In Friction vs. Impact In Pneumatic Conveying

Although both can simultaneously damage pneumatic components, there are some key differences between friction and impact in a pneumatic systems: 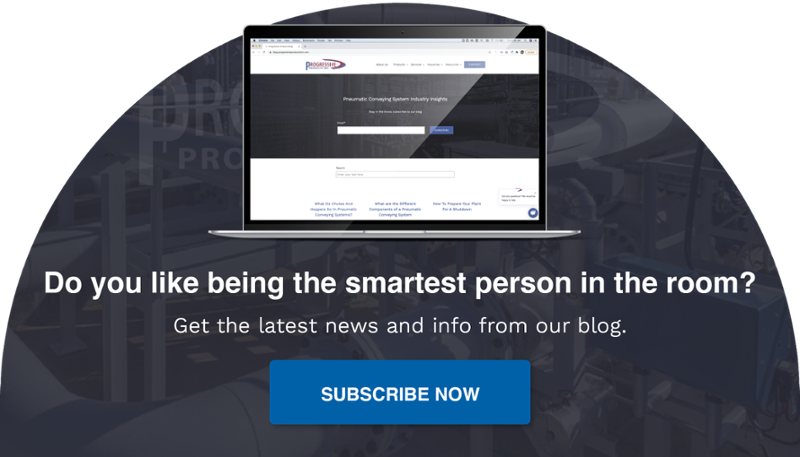