What are the Differences Between Weld Elbows & Sweep Elbows?

There are many different types of elbows for pneumatic conveying systems, but overall they can be grouped into two categories: weld elbows and sweep elbows. We look at what each of them is, how they’re used, their benefits, and the difference between the two.

What is a Weld Elbow?

A weld elbow is a bit of a misnomer in that it’s actually a fitting rather than an elbow - a weld elbow is either cast or forged. Because they’re a type of fitting, they are normally described as short radius although technically there are long radius classifications among weld elbows as well.

A weld elbow’s dimensions run from one  to three times the elbow’s diameter (1D to 3D). This means a 3D weld elbow is technically a long radius elbow, but if you compare this size to a sweep elbow, it’s short radius as they are tight fittings for tight turns.

As the name would suggest, weld elbows are generally welded into the system and do not have tangents. While this is generally not an issue if you are conveying abrasive material it can prove troublesome.  If the elbow does wear it would have to be cut out of the line and a new elbow welded in. One solution to this issue is welding stub ends to each end of the weld elbow and then either welding flanges or using couplings to install in the system.

For example, at Progressive Products we worked to fix  a company’s system that was conveying treated activated carbon for mercury reduction. Their whole system was brand new and each fitting was a weld elbow.   Activated carbon is considered very abrasive and within two weeks of turning the system on, nearly every bend had worn out. A costly and time-consuming error as all the elbows were welded in and then had to be cut out before installing new elbows. This must be a consideration when you’re using weld elbows.

However, if you’re conveying a non-abrasive material, weld elbows can be very beneficial due to the fact they are tight turns and they save space in your system as they are small.

Weld elbows are typically used in process piping to convey steam, water or chemicals. They can also be used to convey dry bulk materials where there is not an expected abrasion problem.

Weld elbows are particularly useful if you have run out of space and need a tight turn or if you are designing a new pneumatic conveying system and there’s no other way to get around a corner. In these last two situations, if you do experience abrasion problems it’s possible to add an abrasive solution to your weld elbow, such as ceramic coating, tangents, or dead-end tees if contamination is not a concern. Dead-end tees are a solid and relatively inexpensive solution and are usually better on friability, although they do cause some power consumption as they can suppress your overall system and you need more power to convey the material.

What is a Sweep Elbow?

A sweep elbow is simply an elbow made out of a bent piece of pipe. There are short radius and long radius versions. To put this into context versus weld elbows, a short radius sweep elbow has a centerline of 3D (3 x the diameter of the elbow) whereas that is considered a long radius on a weld elbow. Sweep elbows usually have tangents on each end as well.

Very few machines can bend a piece of pipe tighter than 3D and if they do they are specialty machines used in specific industries.  If you have a sweep elbow that’s tighter than 3D, it is usually a fabricated mitered or segmented elbow.

The 5 main Differences Between Weld Elbows and Sweep Elbows

Now we’ve covered what weld elbows and sweep elbows are, you can probably see the differences. These differences don’t mean that one is better than the other, more that they are used for different applications and in different industries.

If you need help in selecting the right elbows for your pneumatic conveying system, it’s best to talk with an expert so you can ensure you get the correct components for your needs.

At Progressive Products, we won’t sell you anything you don’t need – contact us today to find the right solution for you. 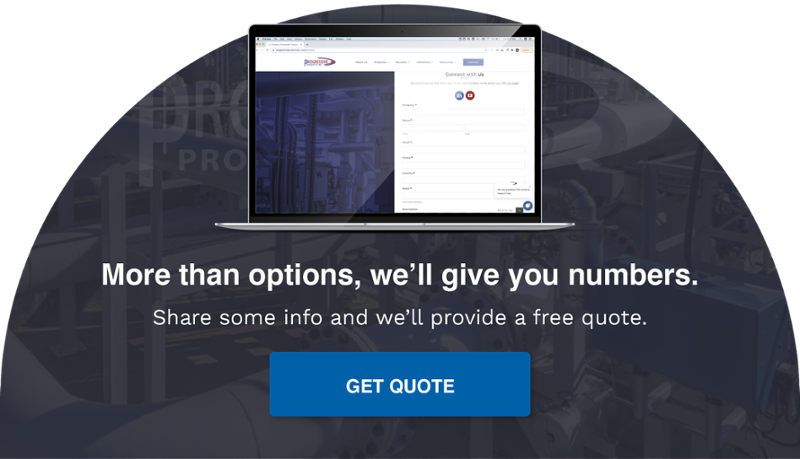