What’s the Difference Between Pipe and Tube?

It’s fair to say that pipe and tube look very similar, and because of that the words are often used interchangeably. However, in industry the terms have their own unique definitions.

A second significant difference is that pipe is usually manufactured to one of several industrial standards, both international or national, providing global consistency. This makes the use of fittings such as elbows, tees, and couplings more practical. Tube is more commonly manufactured to custom configurations and sizes using a wider range of diameters and tolerances and is different worldwide.

In terms of cost, in pneumatic conveying systems tubing generally has thinner walls so it’s often cheaper than piping.

The differences (and similarities) between pipe and tube are both intricate and confusing - and there are many exceptions to the rule - so let’s take a look at them separately in more detail.

The consistent outer diameter is the only number you need to know when it comes to tubing, and the measured OD and stated OD are considered to be the same across all types of material.

When it comes to wall thickness, 11 gauge is the most common across all industries using tubes in their pneumatic conveying systems. It is a commonly available and cost-effective option. Note that the bigger the gauge number, the thinner the wall.

Industries which typically use tubing in their pneumatic conveying systems include food and plastics.

Pipe sizes are slightly more confusing than tube sizes because the terminology used relates to historical - and now outdated - dimensions, e.g. a ½” iron pipe doesn’t measure 1⁄2” anywhere. It’s simply called a ½” pipe because it used to have an inner diameter of 1⁄2”...but at the time it also had thick walls. When advancements in technology made thinner walls possible, the OD remained the same so the pipe would still fit into existing systems, but the ID increased to more than ½”.

It’s the inside diameter which is key because from that measurement you can get an understanding of how much product can flow through the pipe. As the OD is fixed for each size of pipe, the ID varies depending on wall thickness.

Conversion charts for pipes and tubes

The charts below show the NPS, OD, ID, and wall thickness for pipe and tube and will help you understand the relationship between these measurements. 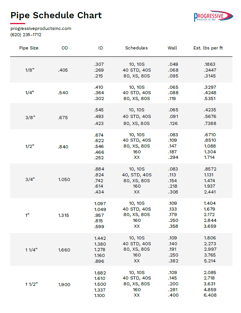 In pneumatic conveying systems it’s important to note that simply increasing the wall thickness of a pipe or tube elbow doesn’t mean it will be any more resistant to abrasion. For example, going from schedule 40 to 80 means your elbow may last twice as long, but it still won’t last as long as you will need it to and it won’t match correctly with your existing system, creating turbulence and product build-up. A better solution is to fit an elbow with an abrasion-resistant backing, which will make it more durable and long-lasting.

It’s important to look for a solution that’s right for your needs and speak to companies withknowledge, expertise, and experience and who can offer a range of solutions to choose from.

At Progressive Products, we won’t sell you anything you don’t need – we’ll sell you the best elbow that’s right for your individual system. Contact us today to find the right solution for you.